Following Sylvain K.'s post on making your website lean, I went down the rabbit hole. Believe it or not, the size (like a regular file on your computer) of a web page has an impact. For this business, a 0.3 seconds difference in loading costs 8 million euro for customers in data usage (see presentation). Out of curiosity, I ran PageSpeed Insights from Google to find out my web page score for this blog. I scored a somewhat disappointing 71 on mobile and 83 on desktop (out of 100)... : Most of the potential savings were in the form of optimizing the size and format of my posts pictures. Google recommends their own format called webp for images. As the extension of the file-type not so subtly suggest, it is optimized for the web. Thankfully, the superb scoop has Google command line application to convert images to webp:

Following the installation, I just converted my original images to webp using the standard ouput presets of cwebp:

And voilà! A beautiful reduction of 97% in size:

At least, the result speaks for itself: Most of the savings left for mobile are out of my hands so to speak. I have limited control over the JavaScript used by write.as. And that's exactly how I want it. After all, the purpose of using a platform like write.as is to concentrate on the words rather than the delivery... Except when it's relatively easy to facilitate the delivery. ;)

This post is not in any way an endorsement for Google and the way they determine if your web page is fast enough.

Spreadsheet efficacy and when it fails

Why Excel and spreadsheets are amazing

A couple of days ago I read an article from HBR about spreadsheets. The intro mentioned the place Microsoft Excel has in our lives. Specifically, it said that at any given time, 750 millions people use Excel in the world and that the average worker will spend 10% of their work life using it. I've worked at three major companies during my accounting studies. As you can guess, I was employed in the finance and/or reporting departments.

Now, all of those organizations have pricey ERPs (real pricey). Still, >99% of my time was spent working on Excel files to accomplish various tasks. I won't get into the subject of why employees and their supervisors don't use ERPs even when the license is already paid. Subject for another post.

However, I can tell you why they use spreadsheet software :

When it falls short

Sounds too good to be true? Here comes the catch: Everyone uses it. By everyone, I mean it. Old, young, no experience, a lot of it, etc. Do you see the problem now? No standard of working, millions of way to create the layout, and to manage those spreadsheets. This result in the utmost variety of quality of workbooks.

When spreadsheet workbooks are badly constructed, the outcome can be as benign as poor efficiency to outright financial disasters. Remember the *London Whale* scandal of 2012? The losses of JP Morgan were multiplied because they were copy-pasting between workbooks and the layouts were not straight forward, resulting in mistakes.

Some organizations recognized these dangers and try to correct them. A good chunk of my time as a financial analyst was to open workbooks used in critical parts of a company, take note of the damages, plan for repairs, or if the document is too flawed, make a brand-new one.

Indicators of a suboptimal workbook

When I open a spreadsheet I've never worked with, I look for a handful of elements to determine whether it's salvageable or not. Here are the indicators to find if you are dealing with a damaged workbook:

Take note that the indicators are not to be use for an ad hoc spreadsheet. (i.e. report that will be use once.)

If you score 3 out of the 6 indicators, it might be time to retire this workbook. It's faster to start from zero with a fresh and solid base than doing the impossible. Making a good spreadsheet for years to come is not a big ordeal, and it does not require you to be an Excel MVP (yes, it's a real thing).

Just do the inverse of the indicators of a bad spreadsheet and you should be more than fine.

If you can, schedule time to read and learn on how to get better with Excel. To get you started, here are a few good reads to build robust workbooks in Excel :

Creating coding conventions like PEP-8 for Python or the famous Linux coding style for the kernel development in C was never a priority with LaTeX. Why? Well, all the reasons to create a coding standard never were really present for LaTeX and the use of the language. Usually, a coding standard emerges when:

But for those familiar with LaTeX, rarely does a project in LaTeX is complex enough to create a standard of coding practices. Indeed, most TeX documents are initially created for personal use like a C.V. or school work, etc. Plus, only a few projects are maintained across multiple years and most of the time those projects are behind closed doors for private entities like a corporation generating monthly reports.

So for the past 32 years (since the creation of LaTeX), establishing a coding standard was not a pressing matter. Consequently, there is no coding style agreed upon by a large portion of LaTeX user.

No standard, is that a bad thing?

If you ever had to work on a large project, like writing a book with more than yourself (multiples authors), you know what kind of hell it can be to maintain a certain level of readability when everyone writes their code differently. How many times do I have to review a text written like the author forgot to break lines :

This is only a small glimpse into the readability problems resulting from using different styles while working simultaneously on a document. Other obvious issues that occurs without style are the capacity to maintain and build on an existing project promptly.

At the Tex Users Group conference of 2011, Didier Vernais presented his vision of a coding standard for LaTeX. You can find the following paper freely available here: Towards LaTeX coding standards

Like myself, Didier had his fair share of scrapes. He goes as far as to qualify the present situation in the world of LaTeX as being close to anarchy. Browsing the GitHub repos containing tex files, I would say that it's a fair assertion. (not to say that languages having code styles, like Python, don't have to deal with the same problems)

I think Towards LaTeX coding standards brings a lot of simple and logical ideas that would increase the quality of LaTeX of documents. This is a summary of the proposed coding standard made by Didier. I would advise reading the whole document when you have time. Otherwise, this is to highlight elements of the paper so that this post can be serve as some sort of cheatsheet in writing robust and consistent LaTeX documents for the masses.

Notice: this only cover elements of the Didier paper on layout of documents (low level style) and not styles standards regarding higher abstraction levels like packages, conflict management, etc. Please refer to the whole document for those components of Didier style.

I only address a small part of DCS because he treats mostly about coding style for LaTeX packages developers while I only want to cover the generic rules that should apply in regular documents.

This one is pretty straight forward: give some room to your text in math mode like you would do in regular text.

Rule 3: One instruction per line

This is one instruction as one logical instruction per line. Not to be confused with simply a single instruction (logical vs. unique). Here is an example:

Rule 4: Indent all forms of grouping

The most simple and yet the most important rule. Please indent when it's logical to do so. Didier has a great example of indentation :

This rule is not treated in the formatting section in Didier paper. In fact, Didier mostly address the modularity aspect from a package developer standpoint. However, I would like to add this rule to the formatting section for one obvious reason: Working with 10 small files is easier and than working with one big file. Don't agree? Let's go back to rule 4 about indentation and let's say we are writing a book. It's easier to get a grasp of the code if this is the structure :

Access is a useful tool that bridges the gap between spreadsheet software like Excel, and more technical relational databases. The goal is to provide a simple, and nice user interface to interact with larger datasets than Excel could efficiently.

The benefit is clear: enjoy a more robust and faster way to handle data than Excel while having a smaller learning curve than traditional database solutions (i.e., MySQL, MariaDB, etc.).

One of the main shortcomings is the limited support for proper SQL queries. Much to my behest, it's not possible to store variables in a query. In my case, I was trying to query a dataset of patients for Ontario Case Costing to find missing nursing data.

For much of these faults, the common (and only?) recourse is to fall back on Visual Basic for Applications (VBA). Yes, the most beloved programming languages.

VBA does not natively 'speak' to Access objects (tables, queries, etc.). To do so, you need to load DLLs the old-fashioned way in Visual Basic Editor (VBE):

A library to manipulate Access objects is to use '[Recordset object library DAO]'. Without loading this library, you'll have to resort to SQL statements stored in string variables.

This is nothing short of a testament to how unmaintained Access is in the various Office software: one of the key libraries in VBA does not even load. Anyhow, if you see this error when adding the reference 'Microsoft DAO 3.6 Object Library' there is a fix: 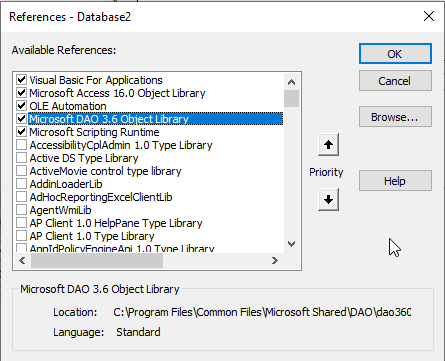 Here is how you can address it:

You should now be able to declare recordset variables. Like so:

When will we finally see the Office suite on Linux? Sure, LibreOffice is good but Microsoft Office suite still is de facto applications used by big and small businesses. If we want to see any kind of push for the Linux desktop in the business environment, the best way to do so is to keep the same applications users are used to.

From my point of view, with my background and education in accounting and finances, I need to have Excel. I have probably more combined hours of usage for Excel than any other software. I would argue this is probably true for a lot of other accountants, financial analysts, etc out there. My level of know-how and productivity with a software I have spent so much time with is not something I can easily convert to another spreadsheet app.

That‘s why I need to have a computer capable of running Excel. Right now, it means using one of two operating systems: Windows, or MacOS. Both are proprietary operating systems (MacOS as some open parts arguably). Both are not widely used for servers. Both are nowhere as secure as the alternatives.

If there is any glimmer of hope, it‘s that Microsoft is listening (to money maybe, wink azure). Most of Azure servers are, surprise surprise, running Linux. Redmond has no other choice but to change it‘s ways and open some of it‘s tools to other platforms (Microsoft Teams), or just open as in open source the code (.NET). Hopefully, they continue to do so and maybe, just maybe, we can finally have a native running Excel in Linux.

Until then, I will resign myself to use Windows. That will allow me to use most of my tools (thanks to WSL) while having access to Excel.